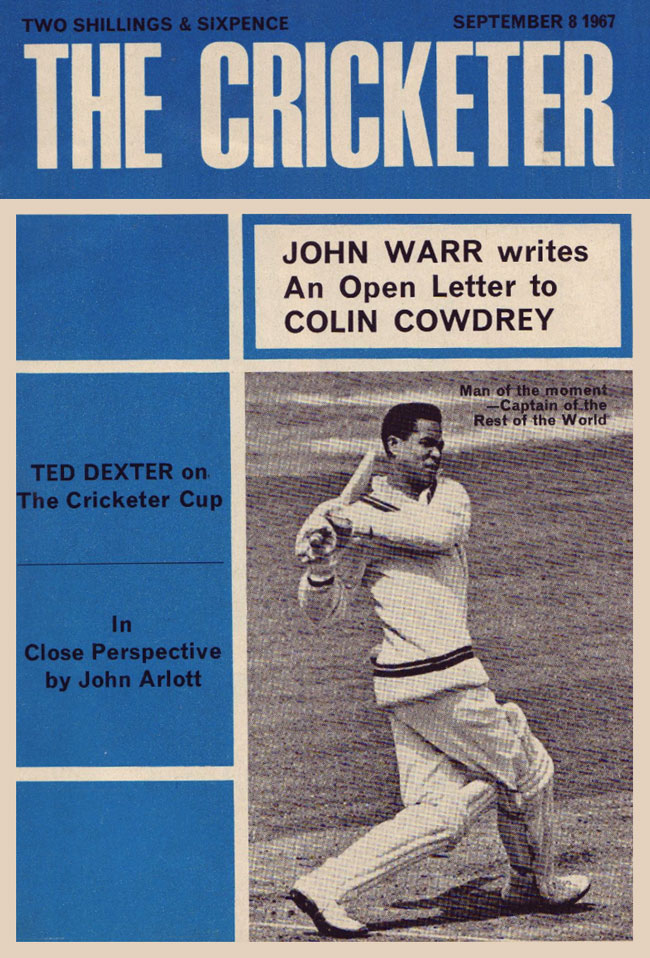 As The Cricketer magazine nears its century in 2021, it is worth recalling some of the great names who have taken it there. They include Sir Pelham Warner, the former England captain and MCC grandee, journalistic titans EW Swanton and Christopher Martin-Jenkins, and the current editor Simon Hughes, the former Middlesex seamer and acclaimed author.

The Cricketer is founded by Warner in 1921 (the summer in which England are defeated 3-0 at home to Australia). “The editor believes that there is room for a paper as The Cricketer, which will endeavour to criticise justly and to comment fairly and accurately, not only on first-class cricket, which, after all, is but a small part of our national game, but on club, services, and school cricket as well,” writes Warner in 1921. “The very essence of cricket is camaraderie and good sportsmanship, and the contributors to The Cricketer will strive to write in such a spirit, hoping thereby to spread an even greater love of cricket than exists at present, and, at the same time, to educate the general public in the finer point of the game.” The more things change, the more they stay the same…

In 1938, a year before World War Two, EW Swanton makes his first contribution – a report of The Oval Test against Australia. His journalism career is put on hold when he finds himself a prisoner of war in camps along the Burma-Siam Railway. The magazine soldiers on during the War, with the editors driving through a Blitz-torn capital on a monthly basis to take the pages to the printers.

Ben Brocklehurst, a farmer and former Somerset captain, joins Mercury House publishers, which acquires The Cricketer at his instigation in 1962.

Warner then stays involved until his death in 1963, when his son, John, becomes editor.

In 1967 Swanton becomes editorial director, and in the same year, Brocklehurst founds The Cricketer Cup – the knockout competition for old boys of public schools.

Mercury House’s American managing director decides to shut down The Cricketer for lack of profit in 1972, so Brocklehurst buys the title himself, running it with his wife Belinda from their home near Tunbridge Wells.

That year The Cricketer also founds the Village Cup (which it still organises to this day), and the Lord’s Taverners Colts Trophy for under-15 school teams.

The Cricketer is enjoying a spike in its circulation at this time, up from 15,000 after absorbing the rival Playfair Cricket Monthly. David Frith becomes editor, with Swanton editorial director. Brocklehurst later adds a profitable travel arm, Cricketer Holidays, to the business.

In 1975 Brocklehurst suggests the idea of a men’s World Cup to MCC; they embrace it, although they reject the idea of The Cricketer being involved.

In 1979 Reg Hayter – founder of the legendary Hayters Teamwork sports news agency – comes in as editor. Two years later he is succeeded by CMJ, a previous assistant editor to Swanton. Circulation peaks at around 45,000 in 1984, and it is estimated that 30,000 players have taken part in one or more of The Cricketer’s competitions in Britain.

It is all change in 2003 when the magazine is bought by Wisden and becomes The Wisden Cricketer, merging with Wisden Cricket Monthly. The editor is John Stern, who stays until 2011.

A new era begins again in 2016; Simon Hughes becomes editor, with Huw Turbervill managing editor. The quest is still the same, though: to produce the best magazine, featuring the finest articles by the game's greatest writers, with news and views, and wonderful photography.